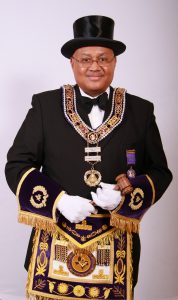 Honorable Wilbert M. Curtis is a native of Temple, Texas and currently resides in Hewitt, Texas. He is married to LaNell Carroll Curtis and he has one daughter, Valerie Curtis Robertson and two grandchildren. He is a member of Toliver Chapel Missionary Baptist Church, Waco, Texas. He was ordained a Deacon in 1987 at Mt. Carmel Missionary Baptist Church, Waco, Texas. He is a graduate of Temple High School. He continued his education as he has acquired an A.A.S. Degree in Computer Science – McLennan Community College and a B.S. Degree in Organizational Management – Paul Quinn College.

Bro. Curtis retired from Texas Farm Bureau Insurance Company in May of 2011 after 35 years of employment in Information Systems.

Bro. Curtis currently serves as the 21st Grand Master of the Prince Hall Masons of Texas and President of the Conference of Grand Masters Prince Hall Masons, Inc.. He is a Past Master of St. James Lodge #71, Past Commander In Chief of Ed Blair Consistory #286, Past Joshua of Rising Sun Court #150, H.O.J., a chartered member of Shiphrah O.E.S. Chapter #54. He is a member of the Knights of Pythagoras Youth Fraternity. On October 9, 2005, Bro. Curtis was coronated a Sovereign Grand Inspector General, which is the Thirty-Third and last degree in Ancient and Accepted Scottish Rite of Freemasonry, Southern Jurisdiction. He was elected Grand Auditor on October 10, 2006 and continues to serve in that capacity.

Bro. Curtis is a Life Member and Honorary Fellow of the Phylaxis Society. He was selected The 2007 Man of the Year. He was recently spotlighted by the Phylaxis Society Magazine, the 2nd Quarter 2012 as “The Face of Prince Hall” and received the distinguished “John G. Lewis Medal of Excellence” in 2014.

The Most Worshipful Prince Hall Grand Lodge of Texas honored Bro. Curtis by naming its Library/Museum the “Wilbert M. Curtis Texas Prince Hall Library Museum”. The theme of the library museum is “Telling Our Own Story”.

One of Bro. Curtis’ satisfying achievements was establishing mutual Fraternal Recognition with the United Grand Lodge of England and other Grand Lodges around the Globe but his greatest satisfaction is working together with the Prince Hall Masonic Family promoting community involvement, benevolence and charity.